Wherever you go, there you are

So things have been humming along beautifully in this new wonderful relationship, now just 5 weeks but feeling very... different... than usual. So crazy about this guy, and no triggers, it's nuts. I've stopped trying to understand it and have just been basking in the light of his attention.

And then my phone died and suddenly everything was silent when I rebooted. No texts, no replies, nothing.

I was cool at first. "Oh maybe he fell asleep mid-convo. I should get some sleep too." I drifted into a sound, peaceful sleep of oblivion for the next 8 hours. When I woke, I still felt that sense of peace that comes from being in love.

Well, maybe my cell company decided my unlimited plan should have a limit after all and it broke. I called and reached his voicemail, smiling when I left a message. He has the most amazing voice.

Still, crickets. Now I was starting to get worried. Was he in the hospital? Was there an emergency? Ohmygod I know. He doesn't love me anymore! That must be it.

A half hour later I'm sniffling into a box of tissues emergency-texting Relationship Crisis Friend (everyone has one), because the obvious conclusion is that something terrible is going on, of course. Rational brain is (not) rational!

Me: I'm having a moment.

Me <honking loudly>: I haven't heard from him since my phone died last night, this is so unlike him. What if there's been some kind of emergency? What if he's not okay?? Or maybe he's rethinking us. <SNIFF!>

RCF: Why would you think that?

Me: I dunno, just triggered I guess. About this time last year I dated someone for about 6 weeks and they seemed really into me until that switched off overnight. Although that situation wasn't like this. We hadn't gotten close.

Suddenly BF reaches out. Interrupts my crisis session. And it's fine, everything is fine, he's still the same amazing guy who seems to think this thing we're growing is the most amazing thing ever and I find myself relieved and sheepish. Wherever you go, there you are. I'm so much better, but I'll never toughen those sensitive innards.

I decided to confide that I'd been feeling vulnerable, but maybe only the tiniest bit so as not to scare him away. Like, leave out the part about the tissues. Maybe sound cavalier. "Yeah, I thought maybe you were in the hospital, or marrying someone else or something." Yeah. No big deal, right?

But he got it, all of it, even what I didn't say, and even when he couldn't even see me. He wrapped words around my heart tenderly like gauze bandages and a hug, and for a moment, the world melted away. <3 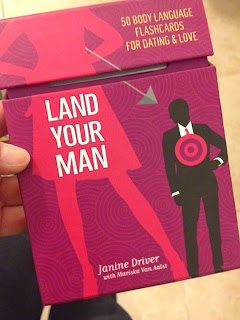 Not embarrassing at all when your new boyfriend discovers this while helping you pack.
at 9:59 PM No comments:

It's the little things that say so much 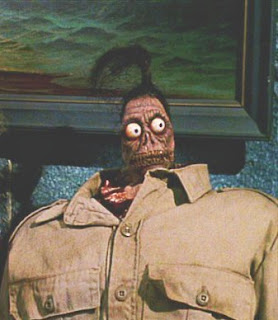 Me (incredulous): Why do you have a picture from Beetle Juice on your phone?

Me (clarifying): I mean, I noticed it because I had it on MY phone just last week. It's kindof an obscure thing you don't see.

Me: The only reason *I* had it on my phone is because I just happen to know someone who looks like that.

Him (falling on the ground laughing): Ohmygod that's why! That just sealed it. We're soul mates.
at 1:08 AM No comments:

It's a month, now, of seeing Conference Guy. I'm going to stop calling him CG and start calling him BF because whatever this is that is happening between us is amazing and it's not casual. It doesn't make sense but we've stopped trying to understand.

"I can't wait to wake up next to you in the middle of the night for the first time and suddenly realize you're there. It would be like falling in love all over again."

"I have a terrible sense of direction!!"
"Don't worry, we'll get lost together."

"I take a long time getting ready."
"However long you want, love."

"Family get togethers might not always be enjoyable."
"I'll roll with it."

Some thoughts from today

-- It's still not easy to hear about the girl the Cyclist is dating, and I don't love this. It means I'm not completely past it yet. However, I *am* finally at the point where I want to offer more "friendship value" by being able to hear what he's up to rather than shutting it down selfishly which was kindof a shitty friend thing, so at least I'm moving past that. 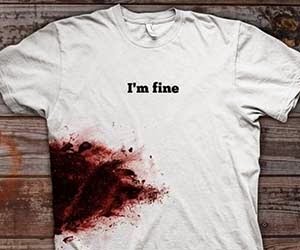 -- I hoped being totally into Conference Guy would erase previous feelings but it hasn't, at least not yet. But that's probably part of being human and all of this is pretty recent. But I appreciate that he and I can even *talk* about this, and all kinds of things actually. The kind of emotional bond we are growing is pretty amazing.<3 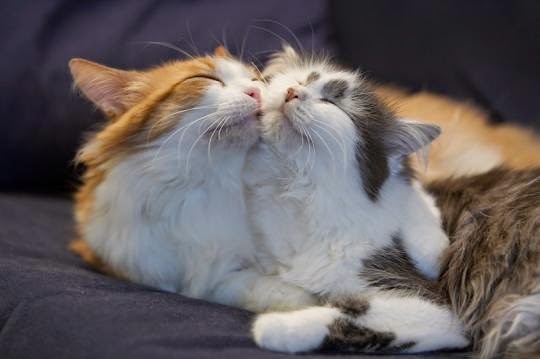 -- I checked my teeth on the shuttle to make sure I hadn't been yakking away at lunch with spinach lodged in my teeth and noticed, of course, my fucking hair. Can't it look nice just ONCE?? 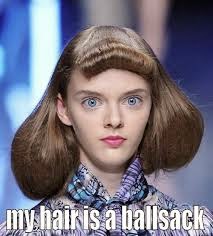 -- I'm so entirely exciting about moving next week, if all goes as planned (and it may not, so we'll see, there might be delays). -- I'm thrilled at the idea of no longer playing trash jenga. No more roommates!! 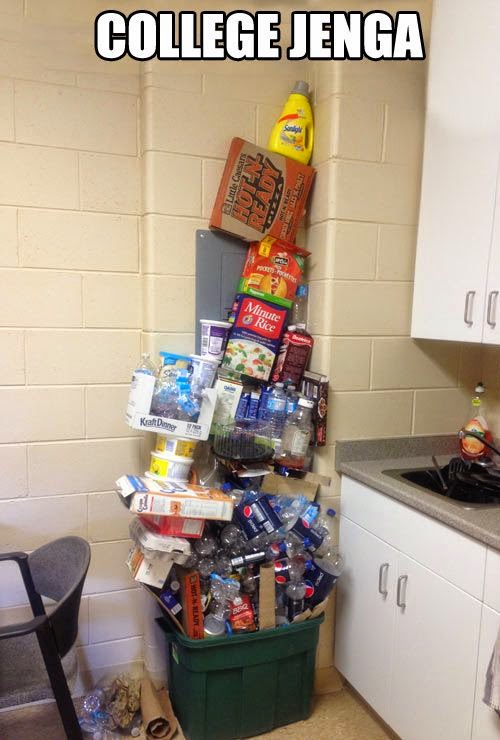 Maybe it's good that I'm trying not to write so much this month because all it would be is disgustingly gushy and romantic. 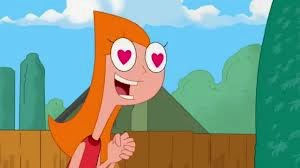 Conference guy is amazing. He gets more so by the hour. If I had put together the perfect list and custom-ordered a man, I could not possibly have gotten a better guy.
Just kidding, the secret formula is really this: 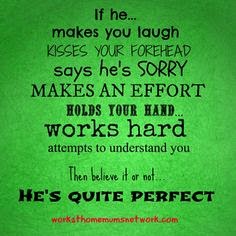 Anyway, while this blog is somewhat of a diary (I have other, more useful things elsewhere online), I still do not want to be responsible for inducing vomiting, so it's quite fortunate that the timing is such that November was going to be my "off" month. 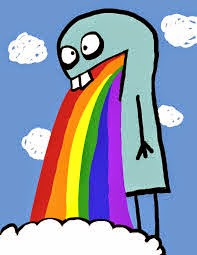 So, I'm visiting my BFF now 3,000 miles from home and she's been making fun of me all week. "Asplenia's in loooove," she sang. I didn't notice because I was texting hearts to my new beau, so she sailed past, announcing his name to no one in particular. I snapped to attention. "Bahahahaa!!!" She howled. "Look at your face! Even the sound of his name makes you happy. I don't think I've ever SEEN you like this!" 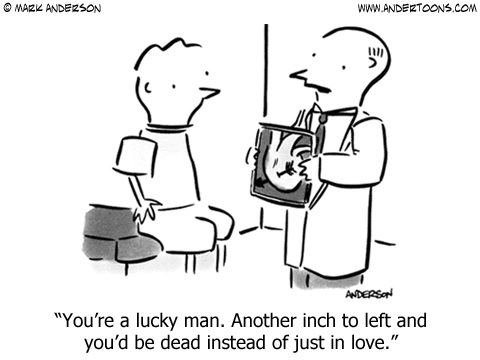 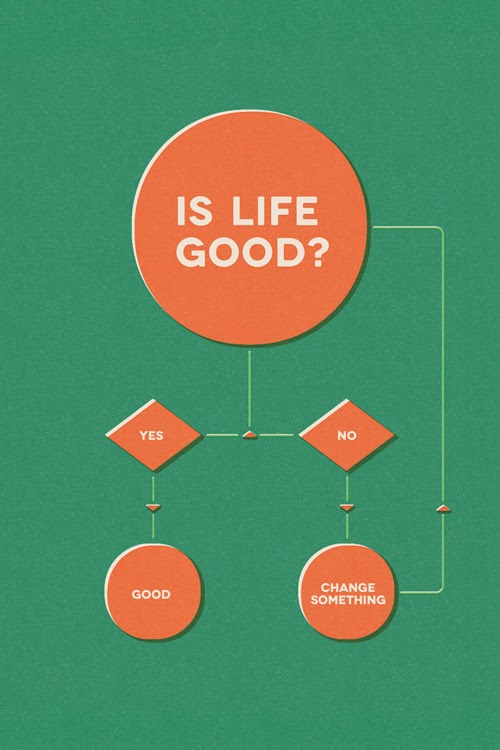 I woke up to this, from Conference Guy, who is showing me how to believe in love again:

I wasn't going to write, you guys, but this... this thing that is growing between me and Conference Guy is off the charts. Maybe there is such a thing as early love, I never really believed in it before for myself although I've heard of it for others... but when it clicks, it fucking clicks, son. I can't get enough of him. We're now 3,000 miles apart and texting each other love songs and if it's even possible to fall even harder for someone you're still getting to know and haven't even, well, officially culminated the relationship with, it's happening. It's a fucking incredible, amazing ride.

I wasn't going to write this month because of other writing projects taking priority but I can't help myself. I have to throw a snippet out here.
The most amazing thing is happening  and I don't know what to make of it. I'm falling in love. I've long since kicked my logical brain out the door, none of this makes sense. I'm not even going to spell out the ridiculousness, that's how crazy it is. But it's a fucking incredible ride. It's like a train that barreled into my life and I'm just hanging on. I don't know where it's going and I don't care. It's the sweetest sensation.
I've been on a high over this guy for two weeks and it feels like the best thing in the world. Dear reader, your loveless blogger has it bad. And it's oh, so good.
"And think not you can direct the course of love, for love, if it finds you worthy, directs your course."  —Khalil Gibran
(Sent from my phone)
at 9:53 PM 3 comments: