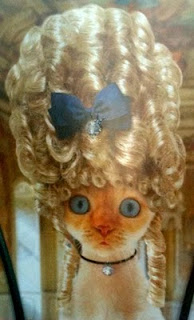 So, I *know* where the goddamned aquarium is. It's only THE central point of the most central part of Baltimore.

But I was so nervous when heading there for yesterday's blind date (my first in what FEELS like a lifetime) that I somehow veered off the exit ramp in the wrong direction.

No problem, right? I have a phone with a GPS, I can recover.

I plugged the coordinates in to backtrack but somehow neglected to notice that I requested the "walking directions" option and thus got lost again and somehow ended back up on the highway.

Fine, no biggie. I figured I'd get off at the next exit and turn around, only the Universe hates me and planned to make this clear. EVERY ENTRANCE RAMP was closed due to some kind of inanely-planned construction doom and I could not get back onto the highway without slowly snaking through traffic-snarled streets via circuitous detour. Clock ticking all the while as I grew later and later for a date I was already delayed to in the first place.

(Really, I hate myself for having absolutely NO sense of direction AT ALL... at least not when nervous.)

Also, I realized when I left the house that I hadn't eaten yet. Not a single bite since the previous night. It wasn't a food-oriented date and I began to worry that I'd pass out in front of the jellyfish, so I grabbed a can of chicken soup and figured I'd drink it in the car since I didn't have time for proper care and feeding of myself. Yes, you read that correctly -- soup CAN be consumed while driving (IF in the proper to-go container). However, I was less than graceful when I tried to remove the revolting layer of fatty globules floating on top and somehow smeared chicken fat onto my passenger seat.

Fast forward, through the stages of anger, denial and acceptance over the chicken fat incident and misplaced spatial lobe incident: I parked, gave the lot attendee a bag of gold coins and the rights to name my firstborn and headed to the agreed-upon meeting spot.

I saw him leaning up against a brick building and wondered if he'd recognize me. I only have one photo accompanying my profile and it's an indistinct one at that, evidence of the halting manner in which I began this process. But he waved right away. The mantra I'd been obsessively turning over in my head for the previous 24 hours ("pleasedon'tgooglemepleasedon'tgoogleme") proven predictable.

(You can do that, you know, with just a phone number.)

But at least he didn't call off the date. I worried he would have but surprisingly, he said it helped him feel he somehow understood me. I was uneasy. "What did he see? How much?"

Note to self: stop living life out loud.

(P.P.S. I'd like to point out that beginning another blog about an even more intimate aspect of life, like dating, isn't particularly well-aligned to the above-named objective.)

Anyway, back to the date.

He was a perfect gentleman, laid back, entertaining, polite, easy to talk to, everything I would have requested for a perfect entry back to the dating world. This means that the rest of this blog post gets boring, since the only thing wrong with anything in this scenario is (as usual) me.

I left the date with a full head, processing much. Do I like him? Did he like me? Do I really want to do this again? Why do I feel so shut down inside? I knew why but I didn't like it. My brain begged for the respite of sleep but I had evening plans. So I hiked up the music and began a long car ride happy to at least have the time to think.

I understand this much about myself: most of my great loves have started lukewarm, and so I have made an internal agreement: I will give a date followup time before dismissing.

Later that night I wanted to send a followup email thanking him but wondered wait, wouldn't that violate some unwritten protocol of not seeming eager? I hesitated and then thought fuckit.

I didn't care if I ever saw him again, really. If my being polite turned him off, whatevs. I sent a message and promptly fell into a deep sleep.

I woke to a nice return thankyou. So he's not playing by unwritten rules either, which is nice. He appreciated my note. Whew. We can have an honest, real dialogue, at least. If nothing else, it's the foundation for a friendship.

I still don't know what to make of all my complicated thoughts though -- I'm trying to follow my gut, but it is groggy and half-asleep. Still, me and my impaired intuition march on.
at 11:39 PM