I started composing this before I moved (during a particularly epic bout of Food Jenga). 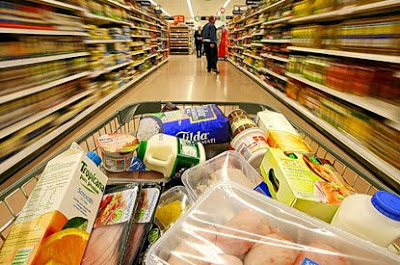 I absolutely LOATHE foodshopping. The entire process of picking, choosing, planning, and securing a week's worth of food sends chills up my spine. I would rather write six TPS reports than figure out the ingredients needed for five days of home-cooked, free-range, pesticide-free, locally-grown, animal-cruelty-free meals whose cost rivals the gross domestic product of a small developing nation.

It starts when I try to delay the whole thing. I begin playing the game Let's Graze on Air in an effort to redeem previous bad decisions and see how long I could last on lukewarm cans of white cannelini beans and stewed tomatoes.

I called a friend recently to whine about the horrors of modern hunting/gathering.

me: "I cannot STAND foodshopping."

me: "YES. The PLANNING. Like, remembering to get chicken stock, but then why buy something I can make, and then wanting to brown the meat but oops, I've run out of sherry, and forgot if I used pepper in the flour last time or not, and darnit, I only have peppercorns, not pepper and the peppercorn grinder is broken. And cutting all the fat out is so time-consuming."

me: "There's like, 2 hours of cooking for a meal that takes 15 minutes to engulf but an hour to clean up! And that doesn't even include the hours it takes to buy it all and put it away. Yuck."

friend: "Um, I don't really have those problems."

me: "Really? Huh. Well, so then I start to play this game of Ingredients Jenga. Like, what could I do with odd groceries lingering around. How could I piece things together to make a meal?"

me: "But it helps me avoid foodshopping."

me, incredulous: "You don't try to see how long you could live off the food you already have? Like see if you could take that can of coconut milk and mix it with rice and spices and canned chestnuts?"

I have an entire cupboard of things I can't stand but somehow ended up in the house anyway: a five pound bag of (what looks like) poisonous mushrooms from China, 17 cans of sardines from my mom, 11 year-old bean thread noodles that I don't know how to cook and a galactic supply of 8-year-old raisins.

The raisins were a point of contention. After the third move (they took up one entire cupboard), I wanted to scrap them. "Do we really need this many raisins?" I asked."They can't possibly still be edible. I mean, don't they expire or something?" (Heh. Somehow I could see eating a 12 year old bar of chocolate but raisins, now, that's another story.)

I would say this story ends well, but really, it just ends. The raisins were finally tossed, but the sardines, well, I ate them.
at 4:59 PM No comments: