Well, since I'd juuuust been talking about this with someone, AND had two in a row first thing after waking up yesterday (first time ever), I thought I'd post this story that I'd written a while back.

In 2007 I thought I was going to die. This wasn't a brush with death, it was a more like a brush with the thought of death. But you have to understand, I never thought about it before, not really. Not for myself. The only time death crosses my mind is in fear of those I love dying and then I do everything I can to quickly brush it away. It's too painful to think about how ruinous the loss would be, sweeping away my entire life and transforming my innards into a desertscape of despair. I can't bear the thought. So I generally try not to think of death.

But last year I went to the doc for weird optical hallucinations. I learned that they were called "optical migraines" and can occur without any actual headache pain -- they're basically blood vessels in the optical centers of the brain spasming. So doc wanted me to get an MRI of the brain.

I remember getting the message on my cell phone, the doctor's worried tone urging me to call back. And I remember standing in the hallway at work by the windows, where I could have both reception and privacy, feeling calm as I dialed the office. Nothing could be wrong, I am too young. I am healthy.

I remember the confidence dissolving into fear as the doctor elaborated on the possibilities. "It looks like it may be an arteriovenous malformation," he said. "if that's so, you will need surgery to correct it."

Brain surgery? Knives and brain matter should not casually be mentioned in the same sentence. I spent my entire life not running with scissors and now someone may have to bring sharp objects towards my head on purpose? I was not liking this.

The followup test to determine if I really had a problem was scheduled for three weeks later at Johns Hopkins.

Three weeks! It was torture. I had no idea if one month later I'd be gratefully relieved or sitting on an operating table.

If someone told you that you might die in a month, what would you do?

I mean, maybe you wouldn't die. But you might. You have to think about it suddenly. "I have 3 weeks to wrap up my life," you'd ponder. What could it possibly mean and how can you possibly do it?

What if I did have to go under the knife and woke up unable to speak? Move? Suddenly have the intellectual capacity of a 2-yr old? Or need to relearn the English language? Anything can happen when someone is slicing into brain matter and careful reading of the diagnosis and treatment doesn't gloss over this fact.

An arterio-venous malformation is a birth defect where veins and arteries are connected directly together. They shouldn't be -- arteries are high pressure, veins are not. There's too much turbulence, like opposing currents in river rapids. Instead, they should be connected through smaller and smaller vessels that eventually turn to capillaries which are so narrow that red blood cells must travel in single file through them, like a 5 lane highway narrowing down to one lane, traffic slowing until the road opens back up.

Since there is no narrowing, the highly turbulent flow translates to an extremely serious risk for a brain bleed and/or death. High enough that surgery is standard treatment. It's not a "wait and see" situation -- if you are diagnosed with it, likely you will go under the knife immediately because it's better to preemptively deal with the risks in a controlled setting than wait for the emergency of treating a burst vessel in the brain.

For three weeks, I tried to tie up loose ends. And not tell anyone, since why should I worry them if it's nothing? It's tough reigning in the fear and the existential thoughts. But I'm not done, I'd think. I haven't traveled enough, lived enough... written, loved, laughed... not any of it enough.

How could any of it be enough?

For three weeks I lingered in limbo, trying to carry on my normal routine. Trying to talk myself out of my fear. Anyone could die anytime, really. None of us should obsess over it, right?

My story ends happily. Nothing was wrong. I basically have a giant varicose vein in the brain called a venous angioma that can sometimes be mistaken for an AVM. A picture of my brain is going to appear in some medical text illustrative of a classic boring case. It wasn't exactly how I'd hoped to be published someday but I'll take what I can get.

I have always felt especially strongly for people undergoing a medical crisis. I remember writing to a good friend's mom as she battled cancer and I will never forget how grateful she was when people asked how she was feeling. People are afraid of cancer and life-threatening conditions. Afraid of frailty and somber diagnoses, afraid to broach the subjects that a terminal illness brings forth. But really, all most people want is to know they're thought of. In their pain, in their hardship, in their joy. What matters in life is knowing that we are not alone.

And so I think about that brush with the thought of death, and about people facing it for real. And I write to some close to me facing the battle. I want to tell them that I'm thinking of them, that they are not lost to me, that their pain is not invisible. I only wish I could share the burden more fully but all I can do is helplessly acknowledge it.


ps. After I wrote this, a lot of people started asking me if there's an association between optical migraines and my situation. There isn't. My MRI finding was incidental, meaning doctors were looking for something else and while in there, noticed this other thing (the venous angioma).

Both AVMs and venous angiomas are present from birth but neither have anything to do with optical migraines. (At least that's current thought, but I did wonder if there could be a slight association for those with AVMs -- not venous angiomas -- located in the optical centers of the brain [the occipital cortex] since the turbulent blood flow can sometimes cause ischemia [or a lessening of blood flow] to surrounding tissue. But I am not a doctor and to date an association has not been proven.)

I did learn a lot about optical migraines though in the process. Recent studies show that there is an increased risk for stroke in people who have them, so if you get optical migraines, don't smoke, don't take birth control pills, DO exercise and eat healthy... in short, don't do anything that further adds to your risk.

My doctor at Johns Hopkins neurology was Dr. Wityk (pronounced "wee-tek"), he's fantastic. He asked me to draw what I saw during an optical migraine and I drew the above picture. The jagged edges are also pulsating with light and color. He said he'd often ask patients to draw a picture of their optical migraine and if they come up with something that looks like this, they're diagnosed: yes, that is an optical migraine. 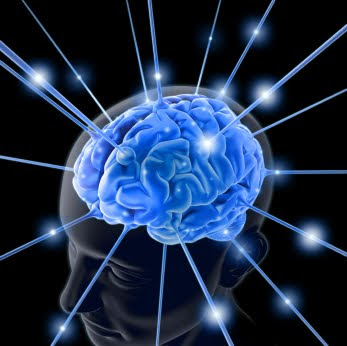 So, somehow I had written this and told the entire internet but neglected to tell my mom.

I was talking to her and was all, "haha, yeah, I felt that way too when I had that brain thing!"

I go (still not getting it), "Remember? When I was having those weird optical illusions and had to get an MRI and then it showed that weird thing? And they wanted to do more testing?"

"WHAT brain thing? What are you talking about? You never told me about optical illusions or a brain thing."

See? You don't really know someone until you read their blog. lol!