I hate jazz and I hate you

Me, texting girlfriend: "Going on date. In case I get stabbed, here's the info for the police."

He picked me up from the metro and, after an introductory hug, offered me a bottle of juice. "Are you thirsty?" I looked at the half-consumed container. "No thanks!"  "But it has vodka in it!" "Um, yeah, no thanks." I repeated. "Ohh, are you worried that I put something else in it? I just thought it'd be nice to have a little vodka before the show." "Yeah, that's not for me. Thanks though."

That's how the date started. I was more preoccupied by the germophobe aspect (the juice was thick and pulpy and had a backwashed appearance) than the fact that it might be spiked with rhohypnol or whether he was a closet alcoholic. Drink from someone's mouth before I even decided if I wanted to kiss it?? My mom would be proud, her lessons have transferred well. 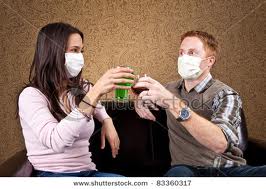 We went to see a play and then strolled through the streets until we arrived at some jazz place. "You like jazz?" he asked. "Um, I don't know much jazz but sure, I'll give it a try."

I think in my head, jazz seemed like relaxing instrumental music.

However, the reality of my experience was more like: 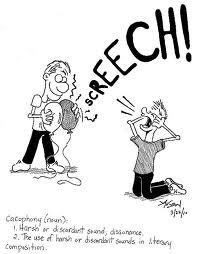 Have you ever been in a crowd and allowed yourself to listen to the collective din of hundreds of separate conversations, effectively soaking in an ultimate cacophany of the human voice? This jazz was like the musical equivalent. There were people playing piano, trumpet, base and drums but none of them seemed to have anything to do with each other. And the audience was so lame -- no one was even slightly nodding to the beat. (Was there even a beat?) The room was full of slack-jawed white people staring disaffectedly at the stage, the most still and unmoved group of musical listeners I have ever seen. Sometimes they'd start clapping during a set for no reason at all, while continuing to look bored. I didn't understand. 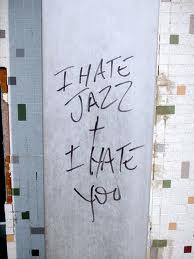 The musicians, though, at least looked INTO their playing. The pianist exhibited the most passionate display of the repeated striking of a single piano key that I have ever seen. 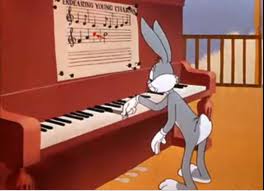 My date was the only one bobbing his head, fully immersed in the experience. (Then again, HE drank all the juice so maybe the rohypnol was working.)

Halfway through the performance, he put his hand on the small of my back and tried to slide it up my shirt. I tugged it back to neutral ground but he protested, "I just want to feel your skin!" I replied "That feels uncomfortable for a first date." (Something you should know about me: I don't have "rules." Comfort is comfort. Either it's there or it's not, and, while it usually increases the more times you see someone, that's not a given. I rely heavily on my gut.) He pressed a little more before I said, "Listen, it's very important to me that if I say I'm not comfortable with something, you respect those messages." He got very respectful then and we spent the rest of the show absorbing the music. (Or, rather, he absorbed it while I entertained myself by observing the dispassionate audience, which turned out to be almost as much fun as I thought the music was going to be.) 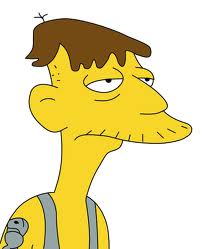 Afterwards we strolled to a food joint, scored a booth and chatted. Conversation was easy. "We have to have some differences!" he cried. "We have too much in common!" "Okay, want to know a difference?" I  offered. "I didn't really like that jazz," I confessed. He laughed, at least not taking it personally. "Well, that wasn't the best jazz for a beginner."

Towards the end of the night, he offered that I could sleep over. "You can stay in the guest room! I'll be good!"

The eve was fun though, despite the awkward bits (which at least could be talked about). But I discovered that he had dated a good friend for a while pretty seriously and I don't think I'll feel comfortable about going on a second date.
at 12:34 PM