Sunday was date #4 with the runner. I invited him to yoga recently and promptly regretted it when the instructor demanded we straddle the floor in an amphibian sex pose: 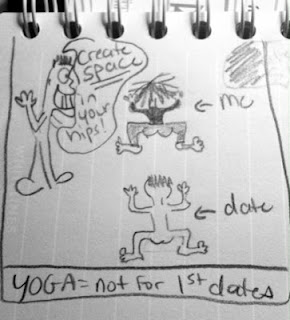 My primary thoughts during the entire class were, "The human body is not supposed to bend like that," "Ohghd," "F*CK!" and "Why does this mat smell like urine?"

Since he already witnessed the floor fucking from a previous session, I invited him again to Sunday's class. I mean, let it all hang out. Whatev.

Afterwards we grabbed frozen yogurt and chatted and, while this is too new of a connection to even know what to write about, I like that he is honest, gentle, open and even-tempered. He doesn't seem like a game-player or embittered. He has a sweetness about him that is endearing.

For some reason, though, neither of us can eat in eachother's presence. It's like we're too shy. We held our frozen yogurts stiffly and watched them melt together. Isn't that romantic? He told me, "I know you're really busy but I would love to spend a whole day with you" and I immediately thought "but when would I EAT*??" (*my favorite activity ever, besides sex and sleep.) I can't chow down if HE'S not, and maybe he's not because I'm not? It's kindof an embarrassing date conundrum that I've not quite experienced before. Even hugs are awkward; when we greet eachother we're stiff and shy. At this rate, we're about 3 months away from handholding. But he listens and his eyes are kind. So we will see.
at 7:02 PM