I pretty much have grappled with all of these except for being controlling. Whoa.

Points:
Yay? I can see I have come such a huge way, but I can also see that I'm not "there" yet (as in, fully... actualized?). Whelp, better step up the work on this! 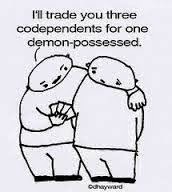