And then a buffalo jumps in there and starts head-butting everything and your face catches on fire and there is a general atmosphere of chaos.

If you're in a relationship, sometimes you probably feel like you're fighting a caged death-match with an invisible spider monkey. And the monkey is rabid. And you don't have any legs. And then a buffalo jumps in there and starts head-butting everything and your face catches on fire and there is a general atmosphere of chaos.
-Hyperbole and a Half's relationship advice

Someone wrote to me recently, asking "my marriage is on the rocks, please help?"

"We're fighting too much. I get hot-headed and she turns cold just when I need compassion the most. We're just not getting through to each other. It's awful. We're at the end of our ropes."

Conflict arises when something is wrong. (Duh, right?) But then why not just make it right?

So, just ask for what you need, right? Or conversely, listen nicely?

But what if you don't WANT that stolen traffic light hanging over your marital bed? To compromise, you offer to give in as long as you can display your assorted toenail collection prominently on the mantle (I really did know someone who kept one in a paper bag so I'm not making that completely up) which seemed like a reasonable compromise at first, really, but now neither of you will budge, relent or detach.

A funny thing was discovered though, by Dr. Marriage (as I like to call Dr. Gottman, the marriage researcher who could predict which marriages were likely to fail). He found that when people brought up an issue of discontent, if it wasn't addressed, they didn't necessarily keep bringing it back up. They just stopped asking. They were still unhappy, they were just letting sleeping dogs lie.


Now no one is talking and the issue gets buried and the couple disconnects. 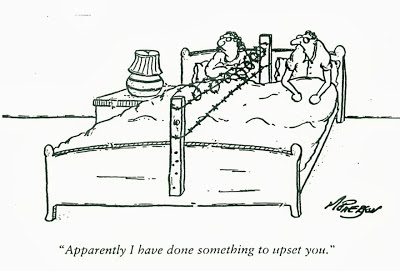 There's a good reason people don't usually talk about their feelings though: they're worried it won't be received well. But emotions never politely dissipate; if something is wrong, it's not going to go away. Learning to communicate how you feel in a way that is true to your authentic self and also nonthreatening to your partner is paramount to a happy union, and vice versa listening without making your partner scared to be vulnerable with you.

Some advice on where to start:
In a conflict, it's easy to become "flooded" and once that happens, the rational brain shuts off and goes into a reactive state.

I read somewhere that it takes 19 minutes for fight or flight hormones like cortisol and adrenaline to dissipate once released during a perceived threat. You cannot fight your biology; once you get mad or sad, these chemicals are coursing through your body and you cannot talk yourself out of their effects anymore than anyone can will themselves out of a diabetic attack. 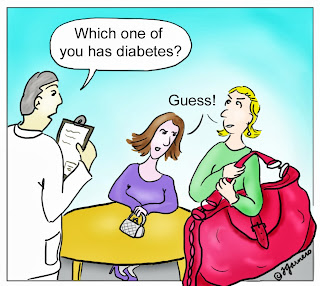 Humans (all animals, actually) are physiologically made for one purpose: to save our own lives. This means we are prepared, in the face of a threat, to respond in one of two ways: fight or flee. That's why those hormones get dumped into your system: so you can take down the saber toothed tiger or scale a tree to escape from the wolf. 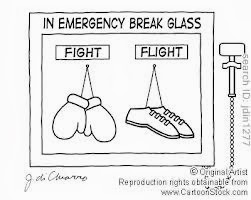 However, this wonderful built-in defense is useless in a marital argument. 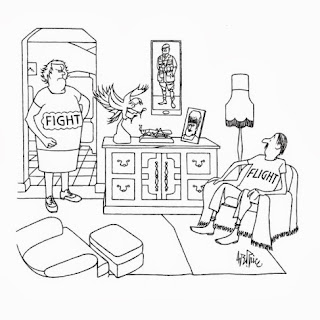 So in a fight, when you feel the tension rising and believe you're no longer in a good place for a productive discussion, give yourself at least 19 minutes away from the threat (the fight) so you can return and try talking again. When you walk away, help your body do what it started: walk, do some pushups, jog in place, whatever -- force your muscles to use up that energy they've been pumped with.

Then once you calm down, ask yourself "what is the longing behind this argument?"

Your longing and your partner's longing is the core of the issue. It won't necessarily come out that way at first but that's why it's so important to uncover the real issue.

My partner and I once got into an enormous fight on a trip when I had to use the bathroom frequently. The real issue? Not that I had to disappear into a public restroom every 2 hours. The longing behind his complaint was that he felt lonely, like I was more preoccupied with the facilities than sharing the day with him. There is often the fight, and then there is the real issue underneath. 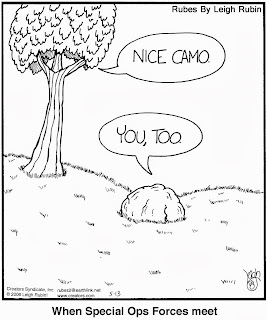 For a good article on marital boundaries, read:
And one more tool for your arsenal: "nonviolent communication."

A common problem is learning how to manage emotions. You feel something, and you're probably not lame so you happen to feel it very intensely, but the intensity is too much to handle.

The first thing to recognize is that you are not this emotion, it is temporary and will pass through you. Observe it like an outsider. Split yourself in two, be your own best friend, hug yourself and offer self-compassion. Accepting emotions instead of being intolerant of them will allow them to pass more quickly.

Then, when you are ready to talk with your partner, try a new approach. 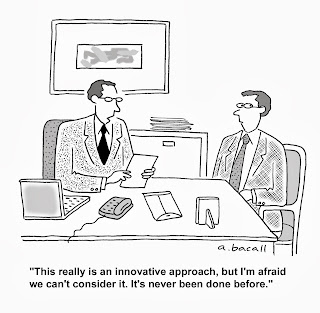 I like "nonviolent communication" because it encourages self-expression without the kind of reactivity that can trigger a partner to shut down. I don't necessarily like the label because it sounds like communication must be either violent or not, but that's not true, it's just a technique to talk without activating your partner's "lizard." 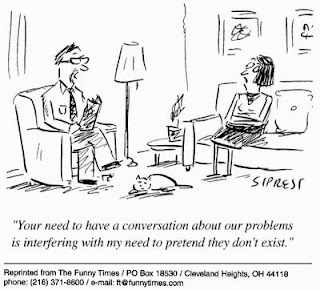 One last resource to help with relationship woes is the book The Five Love Languages.

The premise is that everyone has a certain way they feel loved. If you want your partner to feel loved, you want to speak their love language.

The five languages are:
Do an exercise where each of you ranks this in order of importance. The top two are your love languages.

One girlfriend did this with her husband and then suddenly understood why, when he had to work late and came home with flowers and an apology, that it didn't mean anything to her because her love language was quality time, and his was gifts. Neither of them felt loved by the other because they were expressing to the other how they wanted love expressed to them. Too often we do for someone else what we want done to us.

Now that you know your partner's love language, do another exercise:
Share the list with each other. It should be very specific: small things that would be easy to do and understand how to take action. Not just an abstract "love me more" but concrete things like "hug me first thing in the morning" or "run to open the door if you're nearby when you hear my keys in the lock."

Try to do at least 3 of the things on your partner's list every day. (It can be hard to do them all but aim for at least a few.) 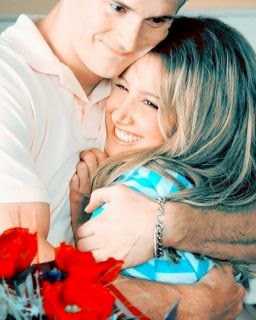 If you're unsure whether you can save your relationship, I recommend: "too good to leave, too bad to stay" by Mira Kirshenbaum. Also, counseling is awesome. Best of luck in your marriage, I hope it works out.