So, I went on a third date with this guy (second date was last week but I didn't want to write about it until I had a better feel of our dynamic) and he SAID THE SAME EXACT THING he said last year: 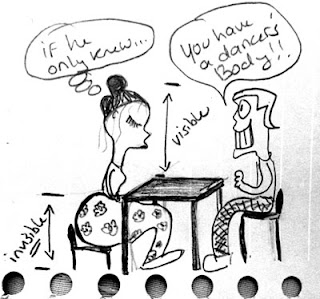 I don't, actually, but it's nice that tables offer an optical illusion. If I have to resemble SOMEthing, I'd rather it be that than, say, a wrestler.

Anyway, so I had gone on one date with him last year and then shut down (yeah, I know, historically my M.O.) so we didn't end up going back out. However, a few weeks ago, I was lying on my bed flipping through my phone and came across his name. "Huh, he seemed like a pretty nice guy," I thought. "I wonder if he's still single."

I called him and he picked up while in a restaurant.

"WHAT?!" he yelled into the phone.

"I MET YOU LAST YEAR," I shouted. "YOU PROBABLY DON'T REMEMBER ME BUT..." I trailed off.

"LEMME CALL YOU BACK!" He boomed in return.

He texted me next. "Sorry, I can't hear anything in this place. Can I call you in an hour?"

I text-replied what I'd been trying to say, and he said sure, would be nice to catch up.

So date #2 (the first date was a year ago) last Saturday was nice, I noticed conversation flowed really easily and his eyes were warm. Tonight was date #3. And you know what? I think I could really like this guy. Damned if I'll tell anyone though, the last time I called my sister to gush after a date, I had to backpedal when it turned out my spidey sense was way off. Now I won't mention a damn thing about anyone I'm dating until I'm getting ready to print the wedding invites. Let my parents think I'm a spinster or a lesbian, I don't care. It's too hard to hear the disappointment in their voices that I'm still alone.

Last week I friendzoned it with the other two other guys I was getting to know. I felt terrible about it - I liked them both but one reminded me of my ex-husband (the good things, but it felt weird) and the other, well, I dunno. It wasn't completely clicking. Oh and the other really good 5 hour date, well, he texted last week about getting together right that minute and I don't like it when someone appears flippant that early in the getting-to-know-you stages. I WAS free but I didn't want to see him last minute like that. So that's out.

Anyway, now I have to figure out what to do with my feelings for the Cyclist. Clearly he has said not to wait for him. But I wanted more time for this in-between stage.