shitty date, and it really IS me. But that's okay.

So I had a date Friday night. Nice guy. Everything on paper says I should like him. Friends vouch for him.

"He's awesome! I've known him forever and he's a REALLY GOOD GUY." He's polite. Funny. Opens doors. SO ready to be into me. Gave me his undivided attention. Intelligent. Worldly. All sorts of things that are important to me.

But I stiffened at his touch.

He tried to put his arm around me and I twisted sideways unconsciously. It was like a graceful dance move practiced for the thousandth time: step and reflexively twist into door.

We got food. He got up to get napkins and leaned over to kiss me on top of my head. I involuntarily shrank under his lips turning the gesture into an awkward air kiss. He never made contact with any actual strands of hair.

Despite the negative reception, he kept trying.

I wrote him an email later. "Listen," I said, "I was uncomfortable with the physical aspects of our date" and said that if we went out again, that I wanted the boundaries of friendship to stay intact. He said "yeah, I figured I was just a more affectionate person than you."

I didn't respond but that really irked me. I can be the warmest fucking person on the planet if I'm comfortable around someone. Just, I dunno, roll with that, okay? Most people take time to warm up. I was also irritated at myself for not "feeling" it but thought okay, don't decide just yet. Give it time.

Good friends AND my counselor pointed out that this guy's lack of perception despite my strong signals was a red flag. Also the callous response was accusatory. "I'm okay, you're not" was the implicit message.

I don't think I'll go out with him again because I just can't seem to want that right now.

This is part of learning though, this giant classroom of the heart. I should stop trying to MAKE myself feel something and just let it flow. Either it's there or it isn't.

I've been mulling over in my head how divorced this whole process is from the other person.

YOU see what's in my head because you follow my blog -- my frailties do not signify this guy's worth. That's so clear, isn't it?

Not to him. He will feel rejected.

When it's me on the other end, being rejected, I will feel the same.

I agree that people should be straightforward. But I disagree with the notion that it's personal. It's not HIS fault that we just don't have the chemistry/comfort level, I'm the limiting factor.

I don't want to hurt anyone. I would like to know love again someday. I don't know how to reconcile these things, but the hope inspires me to keep on. Even if that means I only fall in love with my sketchpad. 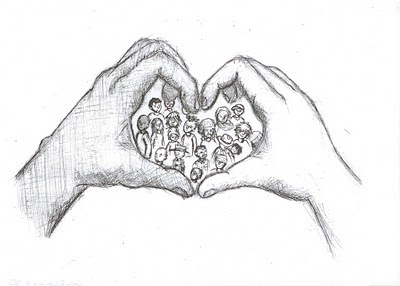