I celebrate both Christmas and Hanukkah. And by "celebrate" I mean that I like to grossly overeat with loved ones. At multiple households.

When I was a student, I was both extremely busy and poor. I didn't have time to get presents until after exams which usually meant ALL shopping (for either holiday) was done Christmas eve. Off to the 24-hour Walmart I'd go, rubbing red, watery, fatigued eyes.

One year I finished shopping at 2am, hauled the loot noisily upstairs and began an epic present-wrapping session that didn't end until dawn. (With two sets of divorced parents between both my ex and I, along with various children and cousins, the list was huge -- around 30 people? -- I can't fully remember, but it was time-consuming and took about 3 hours to wrap everything.) I finished at 5am, set the clock for 6am, and fell exhausted into bed.

I remember nothing after this.

I don't remember the clock going off.

I don't remember the phone ringing.

I don't remember getting up and answering it.

I don't remember picking up the phone or even saying "Hello?" but yet I must have done all these things because I somehow found myself holding the phone with my dad on the other end asking, "where are you??" (He had to ask it several times before I was able to form a complete sentence, I do remember that.) FAIL! I missed Christmas morning. I'm not an alarm-sleeper-through-er so this is pretty indicative of how hellaciously fatigued I must have been.

Luckily my dad's a great guy and (after the initial disappointment) moved heaven and earth so we could still get together later. He never held a grudge about it (did I mention he's awesome?) but I think everyone else is STILL irritated with me to this day.

If I only had this story, It'd be enough. But wait! There's more!

The next year, we finished shopping on Christmas eve, as usual, and came home for an epic present-wrapping session. Only this time, my partner and I said oh HALE no, we are not setting ourselves up for what happened last year to EVAH happen again. We just won't go to sleep! We planned to pull an all-nighter.

So we finished wrapping presents and hit the road even though it was sleeting and snowing. Then... the windshield wipers died. It wasn't safe to pull over just then so we curled our hands out the window and pawed at the glass with a scraper, courting frostbite, to create a little window of visibility until we could safely pull over and deal with the emergency.

There we were, stranded at a rest station on Christmas eve at 2am. Who do you even call?

No one. My partner decided to try fixing it himself. Without even having the right tools, he somehow removed the windshield motor, disassembled it and diagnosed bad electrical contacts. He began scraping them and although it took two hours, the experiment worked! We got back in the car at 4am and continued north, exhausted but determined not to miss the gathering.

The snow got worse and turned into a full-fledged snowstorm. The roads were terrible at that hour so it took twice as long as expected. We didn't arrive until 8am. But we weren't late!! 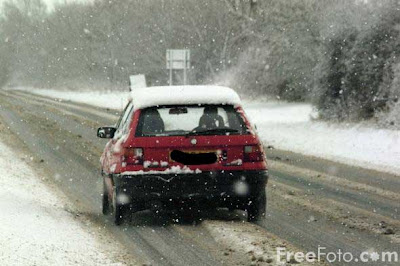